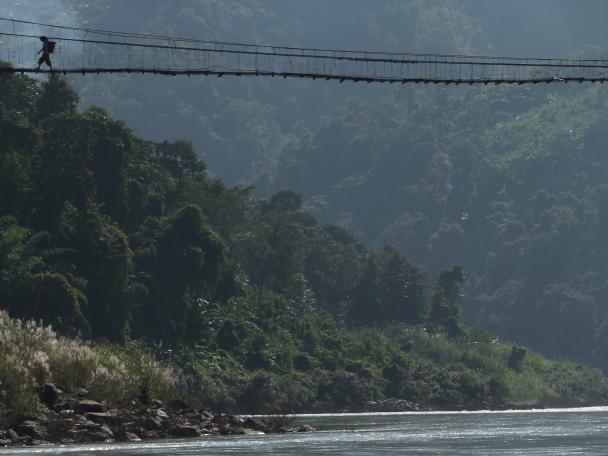 This pilot project aims to locate and survey for the first time endangered and privately held ecclesiastical documents in Mizoram, India. Dating from the 1890s, the earliest missionary documents in the region capture the exceptionally rapid transition of a Mizo hill people fundamentally transformed, from an oral society following traditional animistic religious practices to an overwhelmingly Christian and literate society. This pilot project thus follows the thick webs of ecclesiastical connections in Mizoram, working outwards from a base in the source-rich southern village of Serkawn to survey, and in some cases digitise, records in this historically restricted and monsoon-ravaged frontier region of India.

Just over a century ago, Christian missionaries in Mizoram, the state at the southernmost tip of India’s easternmost frontier, were shocked at how quickly “mildew covered their books.” Cherrapunji, which today markets itself as the wettest place on the planet, was indeed only two hundred kilometers to their northwest. Meanwhile, the missionaries’ shock was recorded in writing—something alien to the non-literate Mizos amongst whom they worked. Today the mildew is still just as active in a Mizoram just as wet, and the preservation of the region's earliest written historical documents has become all the more urgent.

Hill people like the Mizos are often relegated to the footnotes of India’s history. Entire books on the history of the subcontinent have been written with scant sentences reserved for the ‘tribals’ populating India’s seven northeastern states. Only recently is scholarly attention turning to this diverse region. Until now, historians have generally produced ‘armchair histories’ of Mizoram, contentedly pulling their material from earlier works by British colonial political officers.

This pilot project would open up a new line of approach to Mizoram's history. It holds that missionary documents provide the best opportunity to reconstruct the history of once non-literate peoples like the Mizos. This project thus aims to locate and survey privately held ecclesiastical documents, in the conviction that through the location, dissemination, and then careful reading (often against the grain) of such early missionary sources, historians might begin to position Mizos as three-dimensional participants in history rather than as objects of it. The Mizos are unique among India’s peoples for the speed and extent of their Christianisation. In 1901, nearly all Mizos followed their traditional religious practices; in 1961, nearly all were Christian, and today Mizoram is India’s second most literate state. The region’s earliest written sources thus document the exceptionally rapid transition of a society uniquely and fundamentally transformed. History is lost as these sources are lost.

We know that many of these sources are privately held in Serkawn, Lunglei - a village in Mizoram’s south. Here, pioneer missionary JH Lorrain's diary is a key target. This single, bound volume is one of the rarest and richest sources of early Mizo history. In it, Lorrain confides unguarded observations on the Mizo world buzzing around him. Serkawn is also home to the Rev. Pu CL Hminga, custodian of the earliest missionaries’ stereoscopic slides. If preserved through digitisation and dissemination, these would provide scholars an unprecedented glimpse into late-nineteenth-century Mizo life. Equally precious sources are currently extant. News of this project inspired Pu Hminga to direct us up his dirt road to a Mizo centenarian's home. Having kept a daily journal in Mizo for much of his early life, this elderly diarist may have here not only an historical source of crucial import, but also a potential counter-balance to missionary sources. Such a potential lead demonstrates the type of received intelligence that this pilot project acts on, and also why initially we can have strategic methodologies but not concrete itineraries. From a Serkawn base, we work outwards, following the thick webs of interpersonal ecclesiastical connections in Mizoram, and expanding our geographic scope organically, as new leads turn up new people with new sources.

The inaccessibility of Mizoram - until only recently a Restricted Area of India - makes the dissemination of the project's report (and the results of any follow-up digitisation project) all the more important. The project would seek out both English and Mizo ‘pre-modern’ sources (1870s to 1930s) and would begin in mid-September of 2011, when Mizoram begins to dry off after the monsoon, and when village roads again become passable.

This project's main objectives will be:

Read this article written by co-applicant Kyle Jackson on the project.

This project to rescue historical sources took the team of five researchers to Aizawl, Lunglei, Lawngtlai, Saikao, Sialsuk, Tlabung, and Serchhip, and places in between. The team created 10,500 digital images of the rarest and oldest manuscripts, diaries, missionary booklets, church and government records, photographs, and personal letters. Through the far-reaching survey, EAP454 also identified several major and minor collections within the state that require future digitisation.

As the first project of its type in Mizoram, the team was especially concerned to build a new foundation of public and scholarly awareness both of the dangers posed to Mizoram's historical heritage and of the benefits of digitisation. Articles on the project appeared in nearly all of the major Mizo and English newspapers in Aizawl and often the team was greeted by elders in remote villages or scholars at conferences who were already fully informed of the project through Mizoram's healthy print-culture.

The main target was early religious and related records - those English and Welsh missionary records that recorded in writing a history otherwise only transmitted by the then exclusively oral Mizo society. However, the project scope widened early on with the surprising discovery of hitherto unknown and early collections in vernacular Mizo. Many of the earliest missionary-educated Mizos were prolific writers of letters, manuscripts, diaries, and notebooks. Most of these sources still revolved around the distinctly religious axis of the Project's focus, but from a brand new perspective: that of the Mizo. The survey and digitisation programme thus naturally widened to include a major discovery: that, though limited in scope and of course delayed in time period, there exists a Mizo counterbalance to early missionary sources. While for earlier times, Mizo voices must still be sought out in the writings of Christian missionaries, this project unearthed, surveyed, and in many cases digitised also the groundswell of sources written thereafter in the vernacular Mizo.

The Project digitised much more material than initially expected. The most tragic find was several instances of families loaning their historical documents to researchers, only to never have these documents returned. This situation at times complicated the mission, as from the start the team of genuine and honest researchers, following a strict code of research ethics, was immediately suspected, thanks to the misdeeds of earlier “researchers.” The team was able to speak about this issue publicly, and to encourage better practices in historical research.

The Project operated always within a reflective cultural sensitivity, attempting to wedge itself within local vocabulary, history, and culture. The project also broke from the normal modes of operating in Mizoram, and purposefully sought out and engaged minority groups, thus promoting an inclusiveness in research not often seen in Mizoram.

Finally, the Project's introduction of the digitisation concept into the public and scholarly spheres has inspired further work. The local organisation INTACH has been inspired to follow in the Project's digitisation footsteps, but this time for historical objects, megalithic monuments, and the like. And the EAP-funded camera equipment is being used for further digitisation.

The Project identified four major collections in Mizoram that would require less mobility and a longer term commitment from other organisations in the future to digitise in full:

DVDs were given to custodians with copies of their own documents and steel storage boxes given to custodians whose documents were in immediate threat from rats. Digital copies have been deposited with Mizoram University Library, The LTL Library, Mizoram State Archives, Presbyterian Synod Archive, Aizawl, and the British Library.

Read online the open access article: Hearing images, tasting pictures: making sense of Christian mission photography in the Lushai Hills district, Northeast India (1870-1920), published in the EAP Anniversary publication From Dust to Digital. The article can also be downloaded as a PDF (637KB).

Additional online resources from the Lushai Hills are available at the British Museum:

Blog: A Chief and his Wheelbarrow: Digitisation and history in India’s Northeast – November 2014

View archives from this project (220)

Palm leaves were mostly used for writing in South India, because palm leaves were the cheapest and most easily available material for writing.  It has a reasonably long life and high durability.  Normally we can preserve Palm leaf manuscripts for 400 to 500 years in an ordinary condition.  Since

The materials of this collection at Rupayan Sansthan in Jodhpur are a great scholarly resource of music and related oral traditions of Rajasthan, made by and with the late Komal Kothari for those interested in Rajasthan and South Asian studies as well as ethnomusicology, folklore and cultural stu

This project intends to digitise two collections of manuscripts and books in the state of Jammu and Kashmir, India. The team will carry out work in both the Kashmir Research Institute, Srinagar (Mansour Daikoo collection) and also at the Raghunath Temple Library, Jammu.

The history of sound recording in India goes back more than a hundred years. Knowledge about the vast body of recorded music that has accumulated over the decades is still patchy and incomplete: for example, there is no single available list of gramophone records made in India.