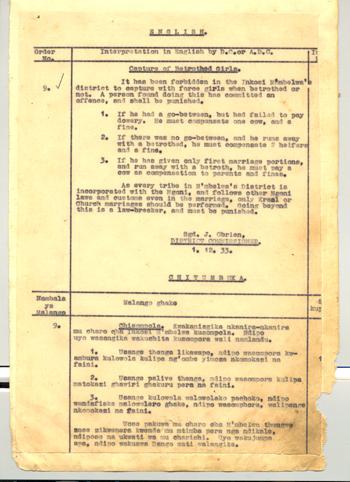 Example of the archive
View archives from this project (32)

This project aims to preserve Native Administration records which were generated between 1891 and 1964 by Native Authorities (traditional chiefs) in Malawi, formerly Nyasaland. The records represent a rich history of Malawi from the colonial period through the transition up to self-rule. The country was known as Nyasaland, which was a British protectorate proclaimed in 1891, then briefly changed its name to British Central African Protectorate from 1893 to 1907, before reverting back to its former name of Nyasaland. It became part of the Federation of Rhodesia and Nyasaland from 1953 to 1963. After the dissolution of the Federation, the country became independent in 1964. Prior to independence, the Colonial Government introduced Native Authorities in Nyasaland as a way of involving the local people in the governance process through their own traditional institutions that were incorporated in the colonial administrative set-up. The introduction of Native Authorities meant that native chiefs became part of Government administration. As such, in the course of undertaking government business, the chiefs created, received and maintained a lot of administrative records.

Prior to British colonialism, Malawi was a predominantly oral society where everything was transacted and captured orally. The establishment of the native authorities marked an historic transition from orality to literacy where the traditional leaders were required to conduct official business in writing. The Native Administration records therefore are immensely unique and historical as they portray the interaction between the literate Western culture and oral African culture and the subsequent triumph of literacy over illiteracy in Malawi. The records are a lasting legacy of the impact of colonialism on the people of Malawi and for this reason, the Native Administrative records need to be rescued from destruction and professionally preserved in the National Archives of Malawi for wider public access.

Recently, the National Archives of Malawi conducted a snap survey in two traditional authorities (TA Mwambo and TA Chikowi) to confirm whether traditional chiefs are still keeping the records and to assess the condition of such records. The results of the survey established that there are significant volumes of vital records relating to the native administration between 1891 and 1964. These records are not replicated nor found anywhere else except in the individual native authorities country-wide and none of them have been transferred to the National Archives. The Native Administration records are regarded as personal property inherited by successive chiefs over the past century. Each traditional authority surveyed had approximately 12 cubic feet of records. Some of the records sampled during the survey include correspondences (in both vernacular and English languages), diaries, photographs, tax and court records. The survey also revealed that the records in question are very delicate and vulnerable to decay as they are kept under very poor storage conditions mostly in chiefs’ houses and courts (which sometimes leak during rainy seasons) and in some cases the records are almost destroyed by termites. The termite attacks coupled with the fragility of the records due to their old age make the records even more vulnerable to total destruction. To prevent further deterioration, and secure the documentary heritage contained in these unique and historical records, the National Archives of Malawi is therefore undertaking this project to further identify and to asses the nature and volume of native Administration records in Malawi. The project will also digitise and re-locate to the National Archives of Malawi the most endangered records from the traditional authorities.

The project targets thirty-two chiefs selected from different districts in the Northern region of Malawi. The chiefs have been selected from one region for this pilot project as the results from this region will enable the National Archives to determine the viability of undertaking a major digitisation project. It is expected that an estimated volume of 200 cubic feet of rare and irreplaceable Native Administration records will be identified and relocated to the National Archives of Malawi for digital preservation as well as physical conservation for wider public access. During the preliminary survey it was established that many traditional chiefs who own these important collections have no objection to relinquishing them. This is because they understand the knowledge value of the collections, but realise that they do not have the capacity and appropriate facilities to take care of the records. The absence of these records in the National Archives of Malawi has created a historical gap in the public archives and as part of the Malawi’s documentary heritage, the Native Administration records need to be identified, collected, organised, conserved and digitised.

The outcomes of this pilot project will include the following:

12 cubic feet of records have been collected from Native Authorities and relocated to the National Archives of Malawi. Their storage conditions have been improved and the records have been reorganised and finding aids produced to enhance accessibility.

3,500 digital images of records have been created, 103 GB. They have been deposited with the British Library as well as being available at the National Archives of Malawi. The pilot survey found that it would be feasible to digitise more Native Authority records country-wide.

The project has contributed much to the professional development of staff in the National Archives with regard to archival description standarsd and digital copying standards. National Archives officers have been able to travel to remote districts and areas in the Northern region of the country to assess and advise chiefs and traditional leaders on record keeping standards.

The pilot project seeks to locate and safeguard plantation records during the colonial period. These records are located in various tea, and tobacco plantations. The main activities will be to locate the records, develop an inventory and digitise samples of the records.

This research is a follow up to the pilot project EAP714 that surveyed historic ecclesiastical archives in seven major churches in Malawi.

This pilot project seeks to survey district notebooks in 28 District Commissioners’ offices and registries in Malawi in order to determine the extent and storage conditions of these historic books.