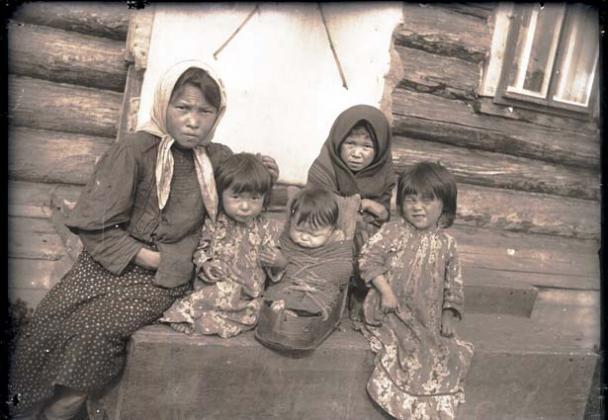 Photograph from the collection
View archives from this project (827)

This project aims to rescue glass negatives and unique paper prints depicting indigenous peoples of West Siberia in the early 20th century. These images are significant both for the international scholarly community and the identity of the indigenous people. The project will also investigate the potential and feasibility of a major project aimed at safeguarding photographic materials from the pre-industrial period depicting the ethnic and religious heritage of Uralic and Siberian peoples, as well as documenting the history of its destruction in 1930s.

After digitisation, the glass negatives will be stored in appropriate conditions; each in a separate properly marked envelope and a safe box. Digital copies will also be made of the most endangered and oldest part of the unique paper prints collection from the late 19th and early 20th century, depicting indigenous life in Siberia. Digital copies will be submitted to the British Library and to the Museum Tobol’skii istoriko-arkhitekturnyi muzei-zapovernik (Tobolsk Historical and Architectural Museum).

The collections are located in poor storage conditions in the Museum of Tobol’sk, which used to be the cultural capital of Siberia and a centre of ethnographical studies until the late 1930s. The collections document the lives of Siberian people, mostly indigenous, while their traditional way of life was not yet destroyed by Soviet modernisation. These genuine images of indigenous life are of great importance not only for the international scholarly community as an ethnohistorical documentation, but also for the indigenous peoples of Western Siberia in their ethno-religious mobilisation, including their land right claims.

Two additional collections of glass negatives with pictures of other ethnic and religious groups such as the Old Believers are located in the museums in Perm and Kirov. The pilot project will investigate the potential and feasibility of a major project aimed at safeguarding photographic materials from the preindustrial period depicting the indigenous life and religious traditions of Uralic and Siberian peoples, as well as documenting the history of its destruction in 1930s. It is a sad paradox that material documenting the persecuted religions may disappear during Russia’s religious revitalisation.

This more general aim will involve locating photographic material from the 19th and early 20th century in Western Siberian archives, museums, and other institutions, where they are held in precarious conditions or in personal collections, and where possible, catalogue and digitise them. Privately preserved photo documents are especially important in reconstructing religious life of the Urals and Siberia before the Soviet modernisation, because most of the religious institutions were destroyed along with their archives in the 1930s.

Some of the pictures which are still available represent the peculiarity of the short unique period of the religious situation before the beginning of collectivisation and ‘cultural revolution’, when indigenous people did not express much fear to manifest their indigenous religiosity. Their main opponent and former persecutor, the Orthodox Church, was the main target of the Soviet State’s atheistic policy and lost its power, while the atheistic campaign against the indigenous religions was still in its embryo. As a result people on the pictures represent satisfaction and joy while manifesting their religious heritage freely. Thus at their best these photographs epitomise significant moments in the history of the ethnic groups because they were created with the direct participation of the indigenous people themselves.

Each plate was cleaned, scanned, put into a new enclosure, labelled according to the TIAMZ as well as EAP requirements, and catalogued. All the images were listed according to the EAP Guidelines. Since the TIAMZ staff undertook digitisation of the paper prints themselves and more glass plates were discovered than originally planned to scan, the paper part of the project was cancelled. Instead the project managed to identify most of the mixed plates, their time, place and authorship.

Some 376 digital images, as TIFF files, were also taken of some of the envelopes in which the plates were originally stored, since they contained valuable notes which were sometimes helpful to identify the images.

Photographic material from the 19th and early 20th centuries were located and surveyed in several archives, museums, and other institutions, as well as private collections, including State archives and museums in Perm, Kirov, Solikamsk, Ekaterinburg and Cherdyn’. On the basis of this investigation a separate survey was prepared.

All the endangered collections have been catalogued and safely stored at the Tobol’skii istoriko-arkhitekturnyi muzei-zapovednik [Tobol'sk Historic-Architectural Museum-Resort's] (TIAMZ). The digital copies of all the plates have been deposited with the TIAMZ and the British Library. An electronic catalogue was prepared to be displayed at the Museum’s official website, and staff were given guidance as to how the surrogate small images could be made available for members of the public and researchers. It is also planned to prepare a catalogue of the most valuable part of the collection to be published as a hard copy.

The Museum itself prepared a report on the project and presented the results for local and national television. In addition the information on the images taken in the Iamal peninsular area was disseminated to the television channel in Salekhard. The results of the project were also presented at two international and two national conferences, and some identified images were presented to the communities of indigenous peoples.

View archives from this project (827)

In the second half of the 17th century, Patriarch Nikon reformed church ceremonies and text books. The purpose of the reform was the convergence of Russian, Greek, Belorussian and Ukrainian cultures.

Special historical circumstances and political events in Russia in the twentieth century made the Tibetan collections at the Centre of Oriental Manuscripts and Xylographs (Institute of Buddhist, Mongolian and Tibetan Studies) and Aga Buddhist monastery ones of the largest in the world.

This project is aimed at preserving the hand-written book collections of the taiga community of Pilgrims, one of the most pro-opposition Old Believers’ denominations: confident in the coming of Antichrist, regards authorities as his servants and supposes that a skit (a small-secluded monastery or