Collecting and preserving parish archives in an Andean diocese (EAP333) 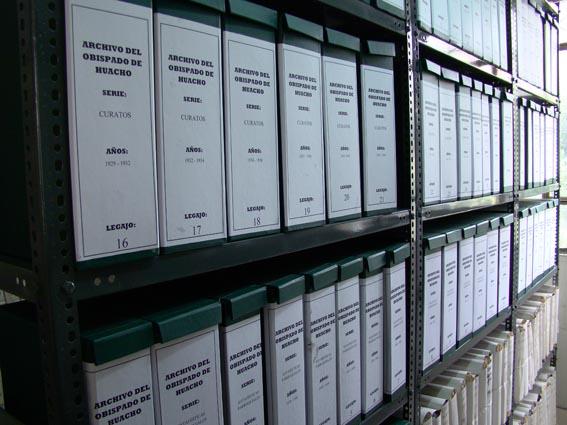 The archive in new storage boxes
View archives from this project (1,779)

This project aims to rescue, organise and protect parish documents of historical interest presently dispersed in 19 localities of the Huacho diocese in Peru. In its first phase, the project involves visiting the parishes to assess the number and quality of existing documents dating from before 1940. The second step involves making provisional inventories and taking the documents to the diocese archives in the city of Huacho where, in a third phase, they will be classified and placed in the diocese historical archives. Finally, digital copies of these documents will be made and sent to the parishes they originally came from and to the British Library. Two workshops, one on archival training and another one on the historical significance of the collection, will also be organised.

The importance of parish records for historical research has been amply demonstrated by numerous scholars around the world. The bulk of the documents to be collected and copied contain information on the local population, such as baptism, wedding, and death records for the period between the late sixteenth- up to the mid-twentieth century. In Peru, there are many parish archives, but very few of them are professionally organised. Parish records from rural areas which are housed in historical archives are rare. Hence the interest of this archive. In addition to the documents mentioned, there are confraternity records, documents of pastoral visitations, investigations on priests' behaviour and priests-parishioners relations, and other papers documenting a range of economic and religious activities over a period of at least 300 years.

The archival material involved can be divided into two parts. The first part has already been collected from fourteen parishes and is presently housed in a small but adequate room in the buildings belonging to the diocese. However, because the town in which the see is located is a seaport, the papers are threatened by the humidity and salt natural in this kind of environment. The second part is presently in twenty parishes that have not yet been visited. Most of these parishes are located in remote places and which house their documents in precarious conditions. Their archives are exposed to several negative conditions, from the effects of political and social upheaval to the action of damp, rodents and insects.

The area in which most parishes are located has been subject to the presence of subversive groups active in Peru over the past twenty-five years. Reports on whether these groups still constitute a threat are contradictory. Because of poor communications, the parishes are vulnerable to attacks and robbery. The precarious conditions in which the papers are usually kept contributes to their deterioration due to the action of fungi, insects, and rodents. The excellent quality of the paper dating to the colonial period has helped the preservation of a significant part of them, but the poor quality of the ink used during the same period, and that of the paper used in the 19th and early 20th centuries are real threats to their preservation in the long run.

In each of the twenty parishes that will be visited, the quantity, type and condition of documents will be appraised. A provisional inventory can then be produced which will be essential to planning the transportation to the diocese archive and the ensuing work of storing and copying. Simultaneously during this period, the documents that already exist in the diocese archives from fourteen parishes will be digitised. The dates of these documents run from 1569 to 1940 and it is expected that the parishes that will be visited have records within similar dates.

The first of the two workshops, on archive organisation and document handling, will be held during this first phase of the project to train university students who will be doing part of the work.

Once the documents have been collected and taken to Huacho, the team will classify them to organise digital copying. During this time, the documents will be placed in an area where they will be protected from damp and other potential threats, ideally with adequate dehumidifiers and on appropriate storage conditions. Copies on CDs will be made and print outs will be given to the parishes where the originals were collected. CDs will also be made and sent to the British Library.

The second workshop will be organised at the end of the project and will present the collections to a local audience. Two or three papers will be presented to illustrate the significance of the documents housed in the archive.

The team organised and digitised baptism, marriage, and burial registers belonging to thirteen parishes of the Huacho diocese, from the oldest (sixteenth century) up to 1900 (some registers up to 1940 were digitised). 458 parish registers have been digitised, totalling 119,630 digital images (6,793 GB).

Other ecclesiastical documents have been organised in three series of confraternities, pastoral inspections, and curates. A total of 137,818 digital images have been taken (7,819 GB).

The original documents are housed in the Archivo del Obispado de Huacho (Huacho Diocese Archives) in Huacho, Peru. New shelving was purchased to house the material, replacing the old rusty and unstable shelves.

Two workshops on archival organisation were organised during the course of the project. Each of these activities was attended by fifty people, most of whom were representatives of the parishes and of other local archives. Specialists from historical archives and universities in Lima were invited as speakers. These activities have helped to raise interest within the community in the preservation of their documentary heritage.

Read online the open access article: Sacred boundaries: parishes and the making of space in the colonial Andes, published in the EAP Anniversary publication From Dust to Digital. The article can also be downloaded as a PDF (743KB).

Catholic gazettes were edited and published in several Peruvian towns and their contributors expressed opinions on national or regional ethical affairs, political and social decisions, and polemical religious issues.

Art history as an academic discipline has had scant development in Peru. It is taught only at the undergraduate level at one university (Universidad Nacional Mayor de San Marcos), and very few professionals are active in the field.

This project will build on the achievements of the previous EAP project conducted by the Institute of Ethnomusicology. On that occasion, three provinces of Peru were covered: Cajamarca, Ancash and Junín - all located to the north of Lima.

This project aims to preserve, catalogue, digitise and make available for researchers an important part of the remaining archival material held in the Historical Archive of the San Marcos National University, dating from its foundation in 1551 to the University Reform started in 1919, in order to