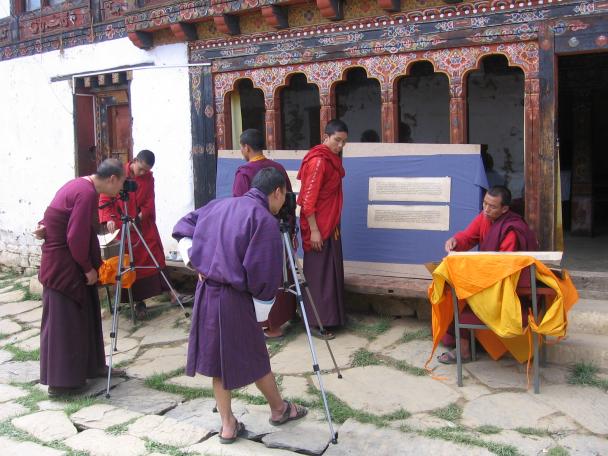 Since the decline of Buddhism in Tibet, Mongolia and other parts of the Northern Buddhist world, the Kingdom of Bhutan has come to be seen as the last bastion of Mahayana Buddhism. With its long history of isolation and independence, Bhutan has remained a unique repository of the cultural and religious wealth of the Buddhist Himalaya. Its secluded monasteries and temples today represent a literary treasure trove that is largely unharmed and still unexplored.

Gangtey Gonpa, founded by Gyalse Pema Thinley (d. c. 1640), the grandson of the famous Bhutanese saint Pema Lingpa (1450-1521), is one such monastery housing an enormous manuscript collection. This includes a set of the 100-volume bKa’ ’gyur, two sets of the 46-volume rNying ma rGyud ’bum, the world’s largest Astasahasrikaprajñaparamita, and about a hundred miscellaneous titles. The collection, mostly written in the 17th century as a funerary tribute to the founder of Gangtey, holds a unique textual, artistic and historical value of immense religious significance for the local community.

Notwithstanding their unique literary, artistic and religious value, the manuscripts today lie in a temple hall, vulnerable to damage and even to possible destruction. An accidental fire from the habitual butter lamps could reduce the entire library to ashes, as has been the case with many libraries through Bhutanese history. The local community lacks any archival skills or the means to acquire them. Moreover, the market for religious artifacts in the West has led to commercialisation of these objects and consequently also to theft in similar remote areas.

The result of this project will be the reproduction of the entire Gangtey manuscript holdings in digital format.

This project successfully digitised the entire collection of manuscripts at Gangtey monastery, producing for each image a jpeg and a raw file. The jpeg images are suitable for research purposes whilst the raw files will be stored as archival copes. A total of 270,398 images, including jpeg and raw copies, have been produced and submitted to the British Library on five external hard drives. An additional set of copies has been deposited with the National Library & Archive of Bhutan and with Gangtey Monastery.

As there was not even a handlist of the miscellaneous titles, approval was given for an xml catalogue of the miscellaneous collection to be produced at the end of the project, using surplus funds. Although the catalogue is basic, a total of 1130 titles, with numerous sub-titles within some of them, have been catalogued.

Gangtey's remoteness and lack of electricity hampered the project but despite these problems the digitisation project at Gangtey has been a success.

View archives from this project (506)

The kingdom of Bhutan is known today as the last bastion of the Himalayan Buddhist civilisation. Its temples and monastic libraries are seen as untouched repositories of the religious and cultural wealth which has been lost or seriously damaged in other parts of the Tibetan Buddhist world.

Drametse Monastery, founded in 1511 by Ani Choten Zangmo, the grand-daughter of the famous Bhutanese saint Padma Lingpa (1450-1521), is one of the major monasteries in eastern Bhutan.

The temples of Tshamdrak, Neyphug and Thadrak in Bhutan hold significant collections of ancient manuscripts such as Buddhist canonical texts, religious and philosophical writings, historical and biographical literatures, which have hitherto remained unknown and inaccessible to scholars.