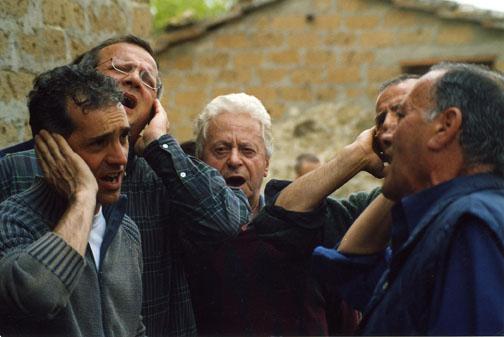 Singing in harmony
View archives from this project (5)

This project is based on a previous census of archives of folklore and oral history in Tuscany and its main focus is Folk Theatre. Folk Theatre in Tuscany is a diffused form of ritual theatre, tied to the crop-growing year cycle and the religious calendar. The most documented genres are the “Maggio Drammatico” and the “Maggio Lirico”. Both performances are acted and sung by groups of local people, on the 1st May in the countryside. The two genres are diffused in two different areas; the Drammatico is mainly located in the northern part of Tuscany, while the Lirico is typical of the South.

Most of these genres are not practiced any more, as changes in the socio-economic situation of Tuscany have produced deep cultural transformations. The only traces left to reconstruct the history of these various forms of Folk Theatre are in sound and audiovisual records, photographs and written text that altogether constitute an enormous documentary heritage on the history and development of Folk Theatre in Tuscany.

The aim of this project is to make digital copies of this documentation. All these materials are at risk of deteriorating if they are not copied onto better supports. The documents will be digitized onto CDs and DVDs in order to prevent deterioration.

31 archives have been selected. These have often been created by local people who have documented their involvement in the Folk Theatre with a tape recorder or a video camera. This project is explicitly targeted on these small content-based archives which do not have the necessary funding to preserve their materials.

This project has achieved the goals of firstly, creating the first thematic collection about folk theatre in Tuscany, gathering together vulnerable archives from remote regions and making them accessible for research; secondly, safeguarding valuable at-risk material and disseminating information on the importance of archival preservation through digitisation; and finally, of renewing interest in the documentation regarding Tuscan folk theatre and folk traditions and acknowledging the important work carried out by the archives' owners or curators over the years.

At the end of this project over 3,300 items have been digitised: 2,633 photographs and slides, 319 documents and posters, 162 video recordings and 198 sound recordings. The total number of digital image files created from these is 5,885, held on 484 CD/DVDs.

Three complete digital collections have been created and deposited at the British Library, the National State Archive of Florence and the University of Siena, Tuscany. One digital copy of each archive has been given to the archive owners.