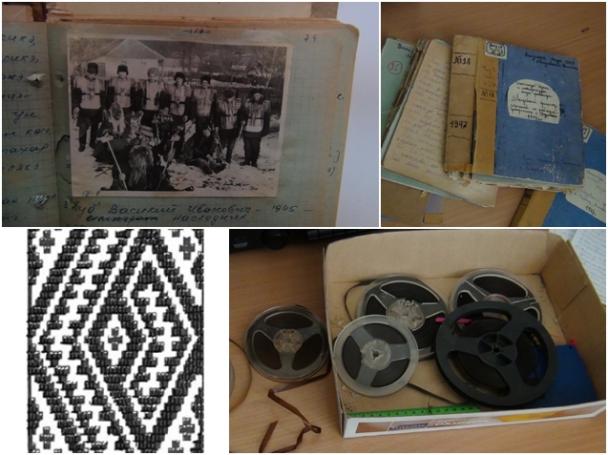 Examples from the collection

The main goal of the project is to facilitate scholarship and research of the Romanian and other ethnic communities’ folkloric creations from nowadays Republic of Moldova and part of Ukraine, through digitising, relocating, making accessible and promoting the endangered folkloric archival material belonging to the Institute of Cultural Heritage and the Institute of Philology of the Academy of Sciences of Moldova.

The archival material, grouped in three great collections - the ‘folkloric collection of the Institute of Language and Literature’, the ‘Stoianov collection’ and the ‘minorities collection’, consists of 450 notebooks and 628 reel-to-reel tapes holding textual, photographic and sound recordings of folkloric creations, made between 1945 and 1991 by various institutes and researchers affiliated to the Moldovan branch of the USSR Academy of Sciences in the Romanian, Bulgarian and Găgăuz communities from southwestern USSR.

This is the most extensive archival material of purely folkloric creations from the former Soviet regions mostly inhabited by Romanians and it comprises all the genres of folklore from these geographic areas: creations expressing the mythological knowledge of the world and the magical relationship with the rest of the universe (magic beliefs and practices, incantations, enchantments, superstitions, cultic songs, carols, orations, customs observed during Christian and pre-Christian holidays); creations specific to various age and social groups, performed at various moments of one’s life (lullabies, children’s songs and games, love songs, shouts of the youth, war songs, pre-nuptial customs, wedding songs, family songs and shouts, laments for the dead); other creations encompassing the artistic thought (sayings and proverbs, surprising metaphors, riddles, historical ballads, tales, folkloric theatre, fantastic and comic novels). There is also a significant number of doina songs, a lyric genre included on the Representative List of the Intangible Cultural Heritage of Humanity.

Most of the material is unpublished, while those publications where some of the creations appeared are very rare and suffer from ideological and editorial faults.

Preservation and promotion of the material through digitisation and upload to the worldwide web will have a great impact on the research of the traditional Romanian, Bulgarian and Găgăuz communities living in the area between the Prut and the Dniester rivers, adding a lot to the knowledge provided by the few other creations which were unsystematically gathered and published during the 19th and the 20th centuries.

Due to historical factors, this geographical area had become ‘economically backward’ and had preserved the traditional, pre-industrial ways of life until well into the 20th century, and the wealth of evidence regarding the customs and creations of the local communities was nowhere recorded as well and as comprehensively as in this archival material. After the collapse of the Soviet Union in 1991, the modernization has come over the region at a very high pace and most of the traditional ways of life and even their memory are, unfortunately, lost now.

At the same time, the post-Soviet transition brought a period of high incertitude and dramatic lack of resources in the field of cultural management and heritage preservation. These collections changed frequently their institutional owners and consequently their content was separated between various institutions, parts of the material were stored in totally inappropriate conditions, valuable items, including the registries of evidence were lost. Currently, although the institutional situation might be a little better, the storage conditions in a warehouse in danger of collapsing, in an inappropriate archival room and in a room designed for conducting research, not for storing archives, still renders the material vulnerable to destruction.

Through the project, all this very significant material will be preserved through digitisation, which will result in approximately 270,000 images and hundreds of hours of sound recordings. Open access to all the digital copies and their minimal descriptions will be provided on the EAP site and a special project website. The original material will be relocated to a more appropriate room belonging to the Institute of Cultural Heritage and reorganized, according to basic archival principles, so that it will also be more accessible for those interested in it.

Local employed staff in the Republic of Moldova will be trained and assisted by experts in the field of digitising techniques and archival collection management. The professional development of the local staff will be momentous for both the success of the digitisation, cataloguing and relocation of a material of such extent, as well as for the future management of the archive.

These results render the project the biggest ever undertaken in Moldova with the view to digitise folkloric archival material.

Saving the Dialectological and Ethnographic Archival Material Preserved in Chişinău, Republic of Moldova

This project will secure, digitise and make available for research the dialectological collection of the former Institute of Language and Literature of the Moldovan branch of the USSR Academy of Sciences, currently owned by the Institute of Romanian Philology “Bogdan Petriceicu Hasdeu” in Chişină

Despite their undisputed historical value and uniqueness, Ottoman Turkish language periodicals, published in post-Ottoman Bulgaria (1878-1943) are currently almost impossible to access by both researchers and the general public.

The Republic of Moldova is a former Soviet Union country in transition to democracy and a market economy. Moldova is inhabited with many ethnic minority communities such as Ukrainians, Russian Old Believers, Gagauzi, Bulgarians, Jews, Roma, and others.

This project is focused on the analysis, digitisation and archiving of 20th century photographs, providing information on pre-industrial elements in Bulgarian minorities’ culture.