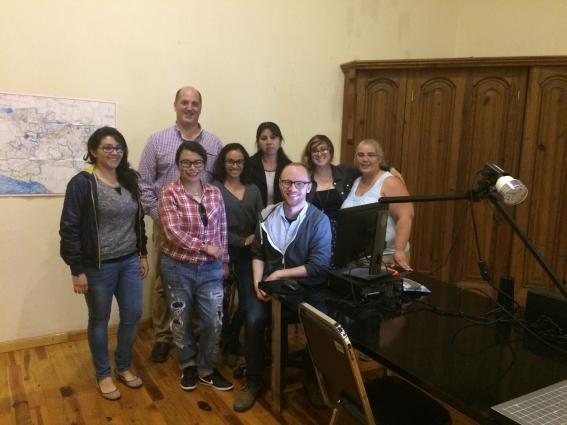 The project team
View archives from this project (214)

This project will digitise 192 deed books (libros de hijuelas) recording the state-wide privatisation of indigenous lands in 19th century Michoacán, Mexico. Though unique, the hijuelas collection is endangered by environmental and political factors. The hijuelas are physically and politically endangered. Physically, the books languish in Michoacán’s under resourced state archive, exposed to sunlight, damp, and theft, and showing clear signs of zoological infestation.

The privatization of indigenous lands—the reparto de tierras—is an epochal but poorly understood process in Mexican history, remaining largely trapped, historiographically speaking, in narratives of liberal nation‐building or postcolonial despoilment. Yet how did indigenous people actually experience/navigate the reparto? Was it ethnocide, or ethnogenesis? As the one complete surviving record of a state-wide Mexican reparto, the hijuelas promise historians valuable insights into a major agrarian/economic transformation and a deeper understanding of changes in indigenous notions of property, agricultural practice, ethnic rule, and identity. Additionally, the hijuelas are important for comparative scholarship and for indigenous scholarship and activism today.

The Libros de Hijuelas (“deed books” or “bequest books” in English) consist of 192 leather-bound volumes containing 75,000 documents dating from 1719‐1929, with additional copies of earlier, 16th‐ or 17th‐century documents. All the documents pertain to, or are precursors of, a centrally important historical process: the dissolution and privatisation of indigenous corporate property under 19th‐century liberal governments, in this case in the western state of Michoacán, Mexico. In terms of content, the hijuelas books contain legal acts, cadastral surveys, village censuses, hand‐tinted maps, and letters, many of the latter written by indigenous michoacanos of Purépecha (Tarascan), Nahua, Mazahua, Matzatlinca, or Otomí descent. Some printed decrees aside, almost all (99%+) of the documents are handwritten manuscripts; only a handful of later ones, some the result of misfiling, are type‐written.

The hijuelas collection is unique in that it presents the pre‐history and a complete account of the privatisation process across a whole state, the collection as a whole being organized according to the 16 political districts into which Michoacán was divided. In most Mexican states, by contrast, reparto records were scattered in notarial, executive, and judicial archives and lost. Since Michoacán was also the seat of a major indigenous empire (the Purépecha) and an imperial borderland for other indigenous groups, the hijuelas are also important because they record the privatisation experience, indeed indigenous negotiation strategies with the mestizo state, from a plurality of perspectives. In brief: this is an essential source for writing the history of indigenous Mexico.

The project has successfully digitised the 194 Libros de Hijuelas plus an aditional 2-3 volumes that were not formally part of the collection but which were found to contain the same kind of material. The vast majority of the material digitised is 19th century in origin and in manuscript form, though it includes a fair amount of cartographic information, also as well as some printed documents (laws, decrees etc). There is some older material, copies of colonial (pre-1821) documents in the main and a small amount of 20th century material running to c.1929, after which time agrarian matters were in the hands of the federal Agrarian Reform Department, not federal states.

Click here to view this map on your mobile device.

View archives from this project (214)

Consolidation and Digitisation of the Historical Archive of the Diocese of Texcoco, Mexico

The project covers three centuries in the historic diocese of Texcoco, beginning in 1580 and ending in 1907.

This project is intended to save, secure, and digitise the colonial and post-Independence documents of the Archivo del Poder Ejectivo del Estado de Oaxaca (AGPEEO).

The principal objective of this project is to identify and organise the existing archival material in native languages at Luis Reyes García’s private collection, in order to establish its relevance for the local culture and research, which so far remains unknown.

Mexico's indigenous population has often been considered to be a people without a history but clearly such peoples do have histories. Tenejapa, like many communities, has documents dating back several centuries.