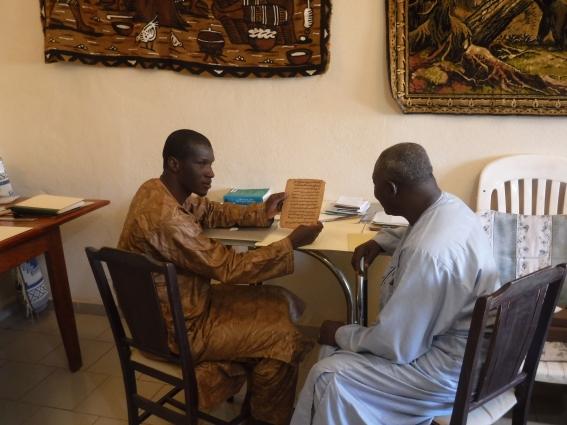 This project seeks to evaluate the holdings of the Yattara family library consisting of some 4000 largely Arabic manuscripts collected prior to the 20th century. The main goals will be to orchestrate initial cataloguing and triage preservation for the collection as well as digitisation of a representative sample of the library’s holdings. The collection has not previously been examined by outside scholars and represents an opportunity to examine both the historical practices of forming such family libraries and document the ways in which the manuscript traditions of the region connected to wider intellectual communities.

The Yattara family library is a private manuscript collection that has been developed over centuries by a prominent family from the Malian city of Timbuktu. It consists of roughly 4000 largely uncatalogued manuscripts ranging from single folio letters and historical documents to 100+ folio texts from diverse fields of Islamic studies. This project aims to produce a written survey of the library’s holdings of Arabic manuscripts (the bulk of the collection) in order to provide a foundation for a detailed catalogue under a future major grant. This initial survey will include both a history of the collection as well as details about the range of materials by genre, topic and format. In cases where key cataloguing data (title, author, copyist, date) is readily available on extant title pages or colophons this will be recorded. Attention will also be paid to issues of condition and, where feasible, interventions for stabilisation of materials (archival boxes, acid free folders, etc.) will be undertaken. This should allow for an overall assessment of the library’s condition in order to develop a more comprehensive conservation plan as part of a major project.

The applicant and Brown University Library have been invited by Mr. Yattara to work with the family’s library in Mali following extensive conversations about the need to preserve, document and make accessible its holdings. This collaboration initiated when the special collections library at Brown University agreed to serve as a repository for several manuscripts which came with the family to the United States. A review of the holdings which are currently managed by family members in the US (roughly 40 items, six of which are now held at Brown) suggests, to the extent that it offers a representative sample, that the full collection houses a diverse and extensive archive likely to include works of Islamic jurisprudence, letters between known historical figures, texts in non-religious sciences, magical treatises, manumission documents, court records, literary works (prose and poetry) among many other textual genres. As an example, a single set of late 18th-/early 19th-century divination treatises that were donated to the Brown University library are currently under study and digitised for inclusion in the library’s institutional repository. These works have already generated important questions about the use of the Arabic language during these later periods of Timbuktu’s history as a centre of scholarship, the use of the esoteric sciences in negotiating social relations, and aspects of syncretism in the practice of Islam. With so much richness for the study of pre-modern, non-Western intellectual traditions able to emerge from just a handful of manuscript pages, the potential wealth of this family archive for extending our corpus of material for study is difficult to understate. Initial indications are that the bulk of the collection is in Arabic and dates from the 17th to the 19th century.

The material is currently located in Bamako, Mali, where it was moved to from Timbuktu during its occupation in 2012 by jihadist insurgents. The material was moved to the capital to avoid the fate that befell some collections that could not be removed. One of the goals of this pilot project is to assess the collection’s overall condition given this effort to remove them from imminent threat. It is understood that the fragility of the materials is variable based on factors such as paper type, binding (or lack thereof), age and the frequency of usage by the scholars who collected these over many generations. The library has not been included in any previous survey of Timbuktu libraries to date and its significant in that it represents a collection derived over many generations rather developed over the half century. For this reason it will be especially important to document its formation and analyse patterns regarding collecting priorities by its various owner/caretakers.

The project team examined the condition of all items in the collection and enhanced the data already available in a basic handlist of the materials that had received some level of rehousing by the SAVAMA organisation.

A dehumidification system was introduced to the library for use during the rainy season and a plan developed for its use and the maintenance of adequate climate control for the library room where materials are housed. 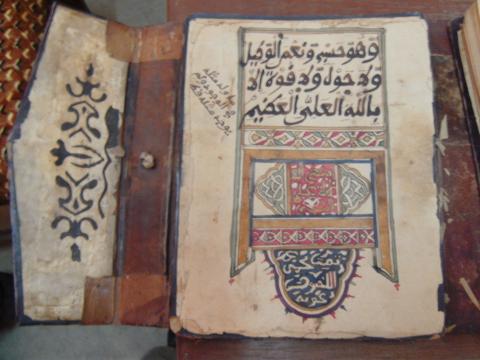 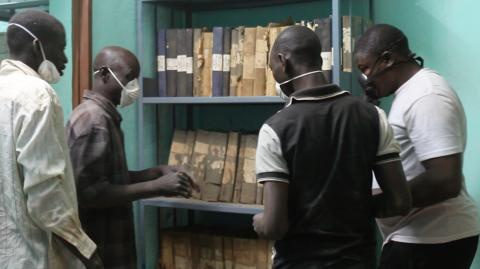 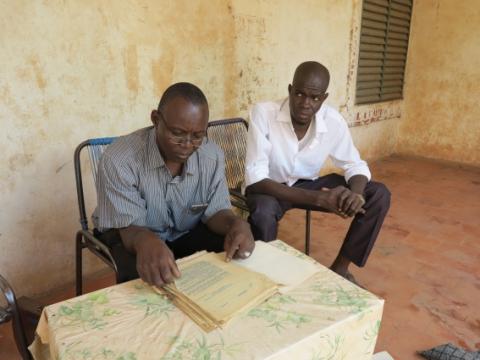 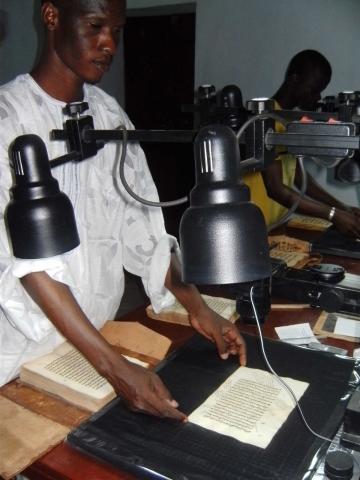