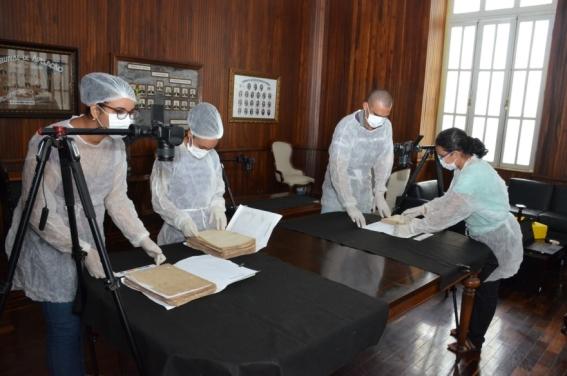 Students digitising documents inside the courtroom in São João do Cariri

This project will digitise criminal and notarial documents in the state of Paraíba in Brazil. The documents come from the semi-arid hinterlands (São João do Cariri), from the tropical coast (João Pessoa), and in-between these two extremes (Mamanguape). They date from the mid-seventeenth to late-nineteenth centuries. The project will create approximately 100,000 images, documents fundamental to studies of: slavery and abolition, orphans and wards of the court, crime, and property ownership in the Brazilian Northeast.

In addition to the creation of a digital archive of documents from Paraíba, this project will also generate a group of skilled students, professors, librarians, and archivists who possess both the experience and equipment necessary to be leaders in the digitisation of historical documents in the Brazilian Northeast.

This is a hybrid project: in João Pessoa and Mamanguape, the students will immediately begin digitising documents. In São João do Cariri, they will start by creating an inventory of the documents.

Notarial and criminal sources are fundamental to the study of everyday, lived experiences in imperial and republican Brazil. Within notarial records, letters of emancipation provide data on the lives of the newly freed; inventories of goods within wills support the study of material culture; and land deeds indicate the prevalence of female property owners and land consolidation among families. Criminal records help understand how the poor navigated the legal system. Further, they provide perspective on the scale of banditry, on blood feuds between families, and on the expansion of the state during the early years of the Republic.

The documents in São João do Cariri are in collapsible plastic file boxes, spread out across the floor of a room within an active house of justice, with other objects scattered over the top, and covered pesticide. The boxes have years written on them that do not correspond to the documents within. The documents in Mamanguape are also in collapsible plastic file boxes, held on metal shelving in two separate damp rooms, with entry off the garage underneath the courthouse. Two of the sites are not official archives, but rather active houses of justice. They are not cared for by curators, and eventually the oldest documents will end up lost or in a shredder. The documents are disorganised, unaccounted for, and exposed to the elements. In some cases, they have been separated from their original volume and are stored as easily lost, loose files. There is no state investment in their preservation and no professional oversight of their care. Humidity, pests, and neglect threaten their perseverance. If an entire box of documents were to disappear, no one would notice.

Each of the following institutions will receive at least three complete copies of the archive: the Núcleo de Estudos e Pesquisas Afrobrasileiros e Indígenas (NEABI) da Universidade Federal da Paraíba (UFPB) in João Pessoa, Paraíba, Brazil; the Núcleo de Documentação e Informação Histórica Regional (NDIHR) da UFPB also in João Pessoa; and the Jean and Alexander Heard Library, at Vanderbilt University in Nashville, Tennessee, USA. A complete copy will be deposited with the British Library and each participating institution will receive a digital copy of their own records.

This project will recover, catalogue, digitise, and make freely available 162 of the earliest-known sacramental records from the Brazilian state of Rio de Janeiro.

The project´s goal is to digitise a collection of manuscript documents deposited at the Arquivo Público do Estado da Bahia (Bahia State Archives-BSA): the 841 volumes of the Notary Records Books produced between 1664 and 1889, this last date being the year the Republic was proclaimed, and one yea

Pilot project to seek, identify, contact, and report on collections of the endangered archives of the states of Maranhão and Pará in the Amazon region of Brazil

This pilot project will explore small, unattended archives in two Amazon states in Brazil, Maranhão and Pará, that are related to the history of enslaved Africans and their descendants.