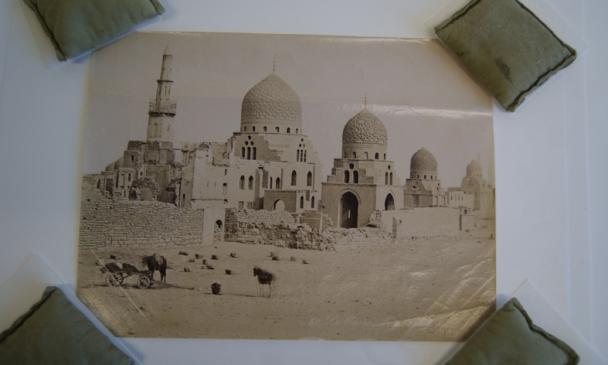 Albumen print being flattened
View archives from this project (3,217)

The aim of this project is to clean, list, index, catalogue and digitise a collection of 3,000 photographs produced in the Middle East by the Maison Bonfils, from 1867 to the 1910s.

The 3,000 items consist of albumen prints gathered in albums and portfolios, glass plates, stereos, cabinet cards and cartes de visite. They are part of the general Fouad Debbas Collection, which contains more than 40,000 photographs. The objective is to undertake a survey, and increase access to and visibility of this most valuable and endangered collection.

Established in 1867 in Beirut, the Bonfils house set out the first photographic studio in Beirut and established photography as a business. As such Mr Bonfils, his wife Lydie, (apparently the first woman photographer of the whole area at that time) and children, all succeeded in capturing a region of immense physical beauty (the landscape photos of Beirut and Baalbeck), of varied ethnic composition (various portraits), and of rapid socio-economic change, at a crucial moment of the region’s history. The Bonfils Debbas collection is clearly an invaluable document registering the history of a region at a crucial crossroads in the wake of great historical upheaval which was about to sweep the region and bring about the Modern Middle East as we know it.

The Fouad Debbas Collection contains approximately 3,000 items signed by Bonfils between the 1867 studio creation and the 1910s when Lydie Bonfils worked in the family’s Beirut studio for some time after her son abandoned the trade in the early 1900s. This Bonfils collection gathered 62 albums including the 7 famous “Mansell Albums” (approx.1966 photographs); 24 portfolios with approximately 720 photographs from Bonfils; 90 stereoscopic views; a hundred glass plates; 32 cabinet cards and “cartes de visite”. While Fouad Debbas was passionate about research and identifying, for example, a chronology for stamps and signatures by Bonfils, he was not very concerned with preservation and some of this valuable material is now endangered.

The Fouad Debbas Bonfils collection faces many risks. Disassociation of the collection is an emergency situation, and the Bonfils sample is a very representative case. After Fouad Debbas passed away in 2001, the two remaining brothers took over ownership of the collection. The entire collection is housed in a commercial building, with no institutional guarantees for the future, but an adequate storage room has been dedicated to safely host the Collection, fitting international requirements in terms of preventive conservation.

The lack of a database facilitates neither the manager of the collection nor scholars to find a photograph among the 40,000 items. Although the Fouad Debbas Collection is often asked for loans in international exhibitions, finding the right images is a real challenge, since no proper inventory or database exists. Digital preservation standards and directives concerning manipulation as well as the verification of information contained in captions (title, techniques) should be conducted. The creation of a proper database will facilitate preservation and access to the collection. Where necessary, some documents will be rehoused.

Lebanon, and the region at large, lacks any serious governmental structures and institutions capable of protecting and preserving the region’s cultural heritage. Only Bonfils and other photographers’ witnesses remain, where property developers replace traditional workshops and activities of our region. Moreover, the Damocles sword of a new armed conflict haunting Lebanon and the instability of the region, with the current war in Syria in particular, are so many risks that threaten the Lebanese and Middle Eastern heritage.

In this context, the Fouad Debbas Collection would at least remain “alive”, at least as a digital copy in a Lebanese university and in the British Library. We believe that the efforts of one man to gather the memory of this region should not be lost forever.

A rigorous listing of all Bonfils photographs and a survey of the most endangered material was undertaken. All the existing Bonfils albums were cleaned and catalogued and some of the photographs were rehoused in better enclosures, such as the entire Bonfils collection of lantern magic slides.

More than 3,000 photographs from Bonfils Studio were digitised in accordance with established standards. The photographs will be available on the American University of Beirut library’s online catalogue and digital collections portal, as well as on The Fouad Debbas Collection website. This highlights its importance as a major pillar of the photographic history of the region, and as an extremely rich document of the socio-economic history of the region. Where there was any information on the back of photos, this too was digitised.

This project triggered many events to promote The Fouad Debbas Collection and the importance of digitisation as a key to safeguard our heritage. Some exhibitions were organised such as the Beirut Photo Fair, the Beirut French-book fair, an exhibition of the collection at the French Institute, and the Archives International Day. It is hoped that The Fouad Debbas Collection can trigger cooperation with Lebanese institutions in order to preserve, provide access, promote the regions’ photographic heritage, and bring closer together those collectors and scholars interested in the visual history of the region. The project has encouraged research on the photographic heritage of the region: through digitisation and cataloguing, access to the Bonfils collection has become easier. Thanks to digitisation, connections were made with scholars to identify some photographs.

The Bonfils collection is now better housed in the storage room of the Debbas building, together with the rest of the Debbas Collection. The digital copies have been deposited in the Jafet Library of the American University of Beirut and in the British Library.

The library of the Great Omari Mosque is one of the most important and oldest national library and archives centres in Palestine. However, it is very vulnerable and at risk due to the lack of proper treatment and preservation in addition to the impact of conflicts and air strikes.

The aim of the project is twofold. Firstly, we intend to finish digitisation of the manuscripts in the collection of the Biblioteca Generale (BG) at St Saviour Monastery in Old Jerusalem, i.e.

Due to the economical circumstances in the last decades in Georgia, the state archives and documents of the country have many needs and problems for saving its cultural heritage.

One of the largest collections of early printed books and periodicals in the Republic of Armenia is located in the Fundamental Scientific Library (FSL). The rare book collection is in particularly poor condition and requires urgent action to protect them and prevent further damage.