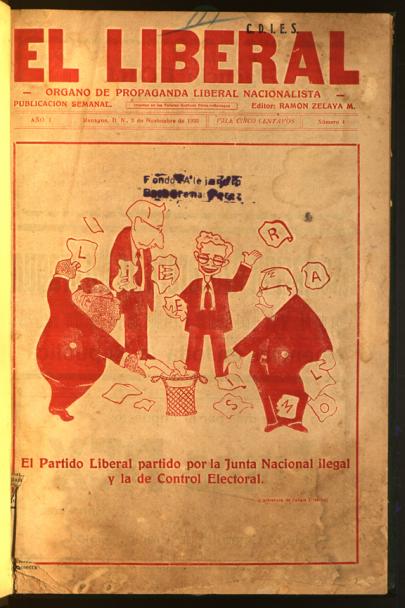 This project aims to digitise a collection of Nicaraguan newspapers dating from the first half of the twentieth century and held in the collections of the Institute of History of Nicaragua and Central America. Digitisation will ensure the preservation of newspapers that are part of the documentary heritage of the country. The condition of the collections is critical and there is a great risk of losing the newspapers if no action is taken.

This collection of newspapers represents a primary source for research and analysis of turbulent periods in the national and regional history of Nicaragua. They contain details of the conflicts and political debates, as well as cultural and economic transformations as a result of liberal reforms in Central America. Precious information about the agroexport model (coffee production) and the nation state building process are also to be found. These newspapers are unique sources to study the US military intervention, and the dispute with Great Britain over the Nicaraguan Caribbean Coast.

The collection covers decisive periods in the history of Nicaragua, including the US military intervention (1909-1933) and its impact on the formation of a strong political and economic elite, which constituted the modern national state. It also documents the struggle led by Augusto C. Sandino (1926-1934) and the emergence of the Somoza dictatorship (1934-1940). Due to the destruction of archives and other historical documents because of natural disasters (Managua’s earthquake in 1972) this collection stands as a unique source for studying the first half of the twentieth century in Nicaragua.

The collection is located on wooden shelves. Most are bound and have varying degrees of deterioration. The main damage is deterioration of pages due to physical handling, general deterioration due to the acidity of the paper, insect attacks and moths, poor storage conditions, water damage, moisture and dust. Only those newspapers in a suitable condition will be selected for digitisation. In the rainy season of May to October, it is difficult to control the humidity which increases to 70%, resulting in mould growth.

As a result of this project, the original newspapers will be guaranteed through digital and online copies. Digital copies will be sent to national institutions that have information centres: Institute of History of Nicaragua and Central University Library, Central Bank of Nicaragua, Central Library of the UCA, and La Prensa. A copy will be sent to the British Library.

67 newspaper bindings were digitised, containing 5,874 newspaper issues, and totalling 31,505 TIFF images. Copies have been deposited with the Central Bank of Nicaragua, the Central Library of the Central America University, the Documentation Center of La Prensa newspaper, and the British Library.

The 67 newspaper bindings are currently in the IHNCA’s hemerographic deposit. Those with greater damage were repaired prior to digitisation and are not available for physical consultation. All the TIFF images have been stored in a server and PDF format back-ups made, which are available for the public’s use in the Reading Room of IHNCA. They will also be hosted on the IHNCA’s website.