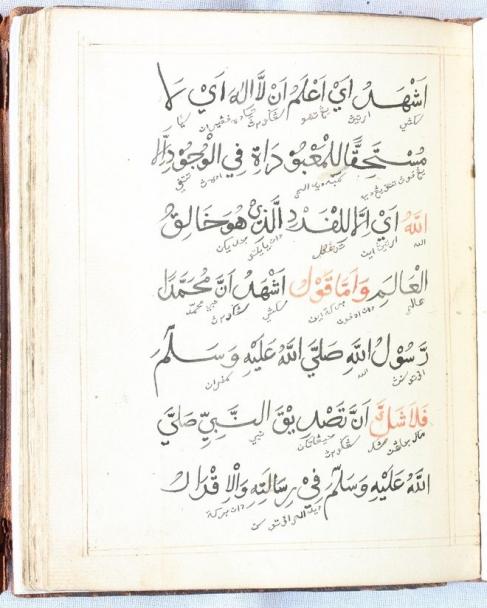 The Malays of Sri Lanka are a remarkable community, having preserved a spoken dialect of Malay and a rich writing tradition in that language despite living in South Asia for over three centuries. Today most fragile manuscripts that still survive are kept in private collections in poor conditions and many are discarded as their owners age and die, and the younger generation no longer reads the Arabic script in which the manuscripts are written nor understand their content or significance. There is an urgent need to document and preserve these rare collections which open a window to the social and cultural aspects of the community’s life, allow for an expansion of our definitions of the ‘Malay World’, and attest to the inter-connectedness over time of Asian Muslim societies.

The history of the ‘Malay’ community in Sri Lanka goes back to the middle of the seventeenth century, following the foundation of Dutch rule in the island in 1640. The designation ‘Malay’ has been commonly used to refer to people from the Indonesian Archipelago who were exiled to Sri Lanka by the Dutch as political exiles and convicts, sent there in various capacities to serve the Dutch, or recruited as soldiers to colonial armies, both Dutch and, at a later stage, British. Many of those designated as Malay were of Javanese or east Indonesian ancestry, and the early exiles included members of diverse local elites. Despite the distance from the Indonesian-Malay world, the Sri Lankan community maintained a flourishing literacy culture until the early twentieth century. Many of the written documents are striking in their similarities to literature produced in the Malay ‘heartlands’. However, there are also examples of works that are not known from elsewhere and represent local creativity and agendas.

The pioneering study of Malay manuscripts in Sri Lanka was conducted by Professor BA Hussainmiya in the 1970s, when he collected several dozen old manuscripts, many of them about to be discarded by families who no longer saw any value in their keeping or those abandoned when the older generation passed away without heirs. The manuscripts collected by Professor Hussainmiya are currently held by several libraries, among them the National University of Malaysia, the Sri Lankan National Archives and the library of the Universiti Brunei Darussalam. Despite their great importance these manuscripts constituted only a small portion of the total number of manuscripts possessed by members of the community and since the 1970s no further efforts have been made to document and preserve the rest.

The Malays of Sri Lanka produced a diverse range of manuscripts in the eighteenth to early twentieth centuries. These included Islamic theological treatises, poetry, biographies of the prophets, mystical writings and more. Local print media also gradually developed, including the publication of the world’s very first Malay newspaper, Alamat Langkapuri (1869-1870).

The aim of this pilot project is to survey and document surviving manuscript and print materials in the Malay language and to digitally photograph a sample of them. The findings from this pilot project help develop a major project in the future. Such a future project would strive to archive all surviving materials and to place copies in repositeries that would be available to all scholars interested in Islam, the literary, political and social dynamics of the Malay world, and patterns of circulation and transmission across the Indian Ocean.

It is important to note that although the focus of the project is on materials composed in Malay, it is highly likely that sections of manuscripts or even entire manuscripts will be written in Arabic and/or Arabu-Tamil (the Tamil language written in Arabic script). Because all three languages (Malay, Arabic and Tamil) were written using the Arabic script close attention is required in surveying and deciphering such content. There is also the possibility of discovering passages in Persian and/or local Indonesian languages like Javanese or Bugis, spoken by the ancestors of today’s Malays. These writings will offer concrete and important evidence to the Malays’ global contacts with Muslims in the Middle East, Southeast Asia and India.

The first phase of the project would involve surveying and listing the manuscripts and books in all known collections belonging to individuals and families across Sri Lanka, primarily in Colombo and Kandy, and their vicinities. A network of contacts and acquaintances has already been established from previous research trips, who are enthusiastic about the prospect of preserving the community’s heritage.

In addition to surveying and listing the materials, awareness-raising meetings will be held with community members, leaders and local scholars to explain the importance and ultimate goals of the project as well as provide information about manuscript preservation techniques.

The project will result in a written report on the state of Malay manuscripts and printed books in private collections in Sri Lanka. The report will include preliminary lists of these materials and digital copies of representative samples from the collections. The images and associated metadata will be deposited in the National Archives of Sri Lanka in Colombo, the British Library and the Australian National University.

This pilot project revealed that surviving Malay materials in Sri Lanka do indeed justify a follow-up major project that will list and digitise these materials for future preservation and use, and that there is, in almost all cases, a willingness and moreover an enthusiasm among community members for such a project to materialise.

At this point approximately 50 Malay manuscripts, books, letters and notes have been documented. Most of the manuscripts do not have titles and many are compendiums.

The most significant single collection documented includes 14 items, among them the only illuminated Sri Lankan Malay manuscript that has been seen to date, an interlinear Arab-Malay copy of the 18th century Maulud Nabi Sharaf-al-Anam (“The Best of Humankind,” a poem recited on the anniversary of the Prophet Muhammad’s birth); another small maulud book with a note indicating it was written in 1865 within the context of the Malay Rifle Regiment; two more maulud texts, one dedicated to Muhideen, the widely venerated Muslim ‘saint’ Abdulkadir Jilani; an undated printed booklet in Romanized Malay containing the locally composed poem Dendang Sayang Pantun Seylon; a compendium of prayers in Malay and Arabic; a compendium in Arabic and English; a 1914 collection of personal notes by M.M Saldin; an 1893 collection of Arabic poems with English translation published in Bombay; very small booklet of Arabic incantations; a printed Malay book from 1935 Singapore that offers gender-related advice.

Further research on this collection promises to reveal important insights. For now one could comment of the prominence of maulud texts within the collection and on the collection’s multi-lingual nature (Arabic, English, Malay), an aspect of Malay collections that is to be expected in multi-lingual Sri Lanka and in the context of the Malays’ particular history.

A very important finding in one manuscript is that it contains 3 pages written in Javanese. This is the first piece of evidence for the on-going use of an Indonesian language besides Malay by members of the community in the nineteenth century and in any period. Although the origins of the Sri Lankan Malays are known to be very diverse, to date all materials studied by scholars contained sections in Malay, Malay and Arabic, and/or Arabu-Tamil. The discovery of Javanese writing leads to believe that it is highly likely that additional such passages will come to light, as may passages in additional local languages that were remembered and transmitted in Sri Lanka.

This project aims to conduct an extensive survey of the endangered Tamil, Grantha and Sanskrit palm leaf manuscript collections in Northern Sri Lanka and to digitise, digitally preserve and provide open access to a subset of those collections.The project will focus on Jaffna and Mannar districts.