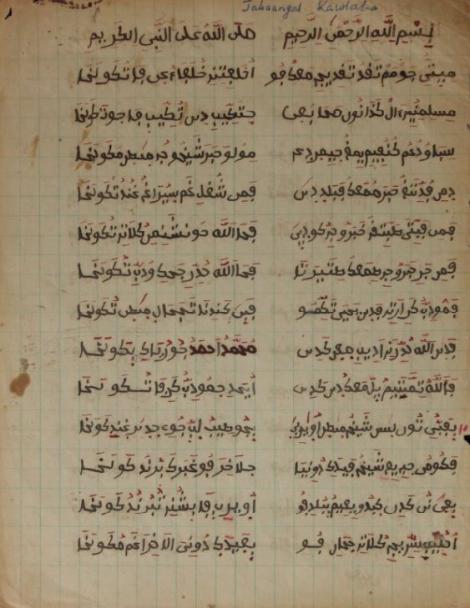 The aim of this project is the digitisation of 93 manuscripts of Fulfulde jihad poetry (approximately 600 pages) by various authors, which are owned by a private collector in 'Yola (Nigeria). The bulk consists of 43 poems by Usman dan Fodio and 26 poems by his daughter Nana Asma'u. The present state of the documents varies from slightly yellowed paper to pages with torn edges - ink or oil is spilled on some of them. Some of the torn documents have been locally sewn together with thread. The documents will be scanned and listed according to EAP guidelines and copies will be stored in the participating institutions.This will serve as a basis for future transliteration and translation and for exploration of the style, language, and sociocultural motivations of Fulbe jihad poetry.

In Northern Nigeria the tradition of reciting religiously inspired poetry is supported by the existence of written copies of these poems. These manuscripts are sometimes hundreds of years old and they have been handed down as precious treasures from generation to generation. The poems in this particular collection are all written in Fulfulde, the mother tongue of Usman dan Fodio, and in ajami, the Arabic alphabet adapted for African languages.

The present owner comes from a long line of Islamic teachers. He inherited a large part of his collection from his mother who in her turn inherited some of the manuscripts from her father, brothers and uncles, returning with new poems from their journeys to other Islamic centers. She has kept them in a ngafakka; a leather bag especially made for keeping the Qur'an and other important manuscripts. The manuscripts will be temporarily moved to the Adamawa State University in Mubi, where the bulk of the digitisation will be done.

The Fulfulde poetry in these manuscripts is based on Arabic poetry styles that developed in the wake of the jihad of Usman dan Fodio in the early 19th century. This jihad was directed against the pagan Hausa states of Northern Nigeria, continuing deep into present day Cameroon. The jihad began in 1804 with an attack on Gobir and ended in 1809 with the founding of the Islamic state of Sokoto. The present Sultan of Sokoto claims direct descent from this great jihadist. Religious leaders of the time such as Usman dan Fodio, his daughter Nana Asma'u, his son Muhammad Bello were prolific writers, often presenting their ideas in the form of lengthy rhyming texts, written in local languages such as Hausa, Arabic, Fulfulde, Tamacheq and always written in ajami script. The topics of the manuscripts are religious, political and historical and they provide an insight to the important Islamic reformist movements at the turn of the 18th century in West Africa in which Usman dan Fodio was pivotal.

It is not a coincidence that these documents are found in 'Yola, at the outskirts of the former Sokoto empire. In 'Yola, Fulfulde is still a dominant language and some people can still recite the poems. However, the Fulfulde ajami texts are no longer recited in the court of the Sultan of Sokoto because of a complete language shift to Hausa there.

The oldest manuscript is probably around 150 years old as it was copied personally by the great great grandfather of the present owner; the dates of others are less precise. The documents need safe storage, proper archiving and digital preservation, which will allow for further transliteration andtranslation work. This project will safeguard the collection in archives for future consultation by both the scientific and general public.

Digital copies of the documents will be deposited in the participating institutions: the Arewa Institute in Kaduna, Nigeria; the British Library in London and Tilburg University in the Netherlands. Arewa House is an archival institute in Kaduna, Nigeria and, as a centre for historical documentation and research and part of the Ahmadu Bello University, is particularly suited for the preservation of these documents.

The successful completion of this project can provide an impetus for the discovery of other such private collections of manuscripts of Fulfulde ajami literary genres. Given the interest of the Sultan of Sokoto, it will also stimulate the search of similar manuscripts in the Royal Archives in Sokoto.

Approximately 1500 manuscript pages, 242 poems, have been digitised and metadata collected about the documents. The original manuscripts remain with their owner and the digital copies have been deposited with Arewa House in Kaduna, Nigeria and with the British Library.

The project’s aim is to preserve five collections of endangered Arabic manuscripts deposited at the Centre for Ilorin Manuscripts and Culture at Kwara State University, Malete, and four private repositories in Ilorin.

The Hezekiah Oluwasanmi Library, Obafemi Awolowo University, contains a huge collection of native/customary court records from the Western Region during the colonial years (1900 – 1963).

The collections held at the National Archives of Nigeria at Enugu and Calabar, which date from the late 1800s to 1960, are invaluable for the history of European contact with Eastern Nigeria.