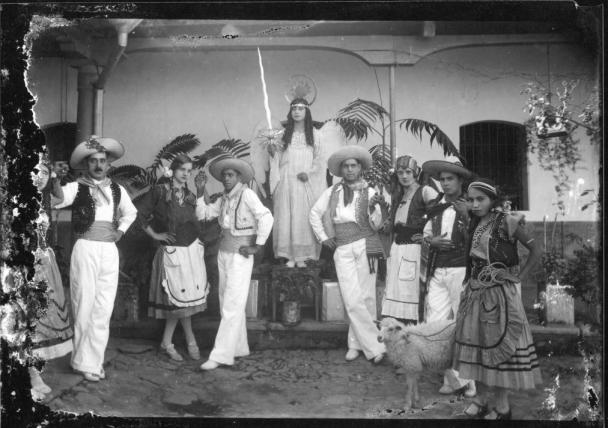 Photograph from the Yas-Noriega collection
View archives from this project (4,542)

The Center for Mesoamerican Research (CIRMA) is a non-profit foundation founded in 1978 and based in Antigua, Guatemala. As part of its mission to recuperate and preserve historical records and to promote historical research about Guatemala, CIRMA has built the most comprehensive social science library in Central America, an historical archive with more than 7,000,000 documents in forty collections, and a photographic archive that today constitutes Guatemala's premier archive of visual history, with more than 1,000,000 images in 104 collections.

This project aims to rescue more than 4,300 glass plate negatives showing daily life in the interior of Guatemala at the turn of the 20th century. Taken by the photographers Juan de Jesús Yas (Japan's first immigrant to Guatemala), José Domingo Noriega, and the Mexican of Italian descent Italian Tomás Zanotti, the images are central to the understanding of ethnicity and culture in Guatemala. Inherently fragile and made more so by climatic and geologic conditions in Guatemala, the glass plate negatives will be transferred onto flexible negatives, copied digitally, and made publicly available for the first time to researchers and the general public.

The three photographers - Yas, Noriega, and Zanotti - produced arguably the most extensive photographs on culture and ethnicity in Guatemala in the late 19 th and early 20th centuries. Their images document the evolving nature of interethnic relations in Guatemala, the emerging syncretism and dialogue between native cultures and Western culture, and the broad cultural change provoked by the expansion of the coffee industry as of the late 19th century. At a time when virtually all other photographers focused on the metropolitan elite in the nation's capital, these three revealed the rapidly changing cultures in the interior of the country.

Kohei Yasu (who became Juan José de Jesús Yas in Guatemala) was the first person to migrate from Japan to Guatemala in 1877. He settled in Antigua, the former colonial capital of the Spanish empire in Mesoamerica. He and his godson, José Domingo Noriega, photographed mestizos of all classes, indigenous families, and civilian and religious elites, recording the professional identity and social status of their subjects. They also documented local popular traditions and the natural and urban landscape of the region, leaving an excellent record of the state of Antigua's colonial architecture in the late 1800s -- after the 1773 earthquake but before the devastating earthquake of 1976 which left the city in ruins.

Tomás Zanotti was a contemporary of Yas, and born in Mexico to a Mexican mother and an Italian father. He migrated to Guatemala in the 1890s and settled in Quetzaltenango, located in the Western highlands. He photographed Mayan people, German, Chinese, and mestizo families in the studio, in their own homes, and in activities of their choosing, and documented the rapid social and cultural change brought on by the rise of coffee culture in that region.

Both the Yas-Noriega collection, acquired by CIRMA in the early 1980s, and the Zanotti collection, on extended loan to CIRMA by the Girón family as of 1990, arrived partially deteriorated. They had been poorly stored in Guatemala and had been exposed to high levels of humidity and variable temperatures. Many had developed bubbles, flaking emulsion, or were scratched and stained, and others were chipped. Since arriving at CIRMA, the glass plates have been stored in a temperature and humidity-controlled environment. With some cleaning and repair, these glass plate negatives will transfer well onto internegatives.

These two collections are the only significant collections of images of their kind in existence today. The glass plates are extremely fragile and susceptible to breaking, further flaking, and scratching caused by dust and age. The fragility of the glass plates requires expert handling and thus the plates are not accessible to researchers or the general public except in exceptional circumstances.

The stabilisation of the original glass-plate negatives, as well as their preservation and placement in squared envelopes, cardboard boxes, and acid-free, archive-quality boxes was carried out according to the training and recommendations given by the Mexican consultant Rosángel Baños.

Converting the inter-negatives into digital versions resulted in 4,507 digital copies of 4,494 inter-negatives and 13 positives with two main objectives: the first was to promote the images to a wider and more diverse audience; and the second one was to preserve the images taken by these three photographers with a master digital copy of archive quality.

The original glass-plae negatives are now kept in a special photographic storage within CIRMA’s Guatemalan Photographic Library to avoid their manipulation and deterioration if handled by users.

At the same time, 4,494 master inter-negatives will preserve these photographers’ images, now that they will be kept under controlled environmental conditions and under specific photograph preservation parameters, in a different storage designed specifically for audio-visual safe-keeping, separate from the originals.

Five sets of digital copies have been produced and burned onto archival gold DVDs. The copies have been distributed to the British Library, CIRMA, and the Mayan Educational Foundation (MEF), located in South Woodstock, VT.

The digital copies of the photographers’ glass plate negative images will be made available to the public through the Guatemalan Photographic Library’s internal database. In addition, the records of the multilevel descriptions will be accessed through CIRMA’s website. Furthermore, the images will be promoted through national and international photographic exhibits, with their respective catalogues.