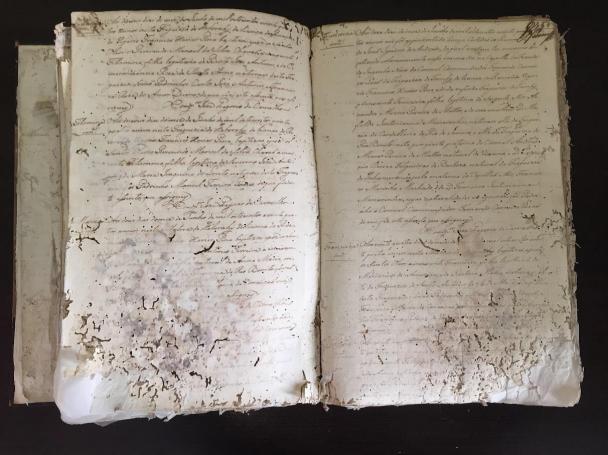 Seventeenth-century baptismal record exhibiting signs of insect and water damage, rendering the bottom of the pages illegible
View archives from this project (345)

This project will recover, catalogue, digitise, and make freely available 162 of the earliest-known sacramental records from the Brazilian state of Rio de Janeiro. The project Preserving the Earliest Ecclesiastical Sources from the State of Rio de Janeiro is an urgent and necessary intervention to preserve unique and endangered documents from the 17th through the 19th centuries. These records represent the longest and most uniform serial data available for the history of African, indigenous, and European populations in Brazil. They include records of baptisms, confirmations, petitions to wed, wills, and even, on occasion, divorce actions. They also include records for church brotherhoods organised along ethnic lines, through which enslaved and free Africans recorded not only ceremonial and religious aspects of their lives, but also their social, political, and economic networks.

Once digitised, these records will be incorporated into the Ecclesiastical and Secular Sources for Slave Societies Digital Archive (ESSSS). ESSSS was launched in 2003 with a grant from the National Endowment for the Humanities by project director Jane Landers of Vanderbilt University and her codirectors Mariza de Carvalho Soares of the Universidade Federal Fluminense (Rio de Janeiro, Brazil), and Paul E. Lovejoy, of York University (Toronto, Canada). The NEH grant funded the "guerrilla preservation" of the oldest records for Africans in Cuba and Brazil and subsequent grants, including those from the British Library Endangered Archives Programme, have allowed preservation of additional records in Cuba, Brazil, Colombia, and Spanish Florida. Teams of historians trained in languages and palaeography, IT specialists, bibliographers, and archivists have worked collaboratively for over a decade to create the ESSSS Digital Archive that now contains over 600,000 unique images dating from the 16th-19th centuries and preserve the history of between four and six million African and Afro-descended individuals. Some of the documents preserved during our earlier projects no longer exist in manuscript form and can only be accessed through the ESSSS Digital Archive.

In 2005, Jane Landers, Mariza Soares, and Francisco Muller directed a team to begin digitising ecclesiastical records from the Archbishopric of Niterói-ACMN as well as from Nova Iguaçu ACDNI. All of these records are now available online through ESSSS. The accessibility of these documents through the ESSSS Digital Archive has been of immense importance for students and independent researchers working on the history of the state of Rio de Janeiro and Brazil, since very little historical documentation remains from the 17th century.

The visibility of our first project attracted the notice of the Archbishop of Niterói, Dom José Francisco Resende Dias, who has taken a renewed interest in the historical significance of these volumes. Beginning in 2010, the Archdiocese spearheaded an initiative to gather ecclesiastical records from parishes across Rio de Janeiro state, including 16th century Jesuit mission sites, now-defunct churches and sites beyond the Archbishopric's current jurisdiction, and centralise them in ACMN. The volumes were gathered from colonial-era churches and chapels, where they were at the mercy of the tropical climate. A number suffered damage from insects, mildew, mould, and salt air. Some were further damaged during the 2010 move. Flooding in September 2016 further affected the documents. ACMN and the National Archive of Brazil recognise the importance of these volumes, but do not have the equipment, personnel, or financial resources to preserve them; if not digitised soon, we risk losing many of them. The project Preserving the Earliest Ecclesiastical Sources from the State of Rio de Janeiro is an urgent and necessary intervention.

We will digitise all six of the volumes dating from the seventeenth century; all thirty-seven volumes from the eighteenth century, and all 119 volumes and some loose documentation from the nineteenth century. Following successful patterns developed in previous projects, the grantees plan to purchase two tripod/camera setups (and necessary storage capacity) and one laptop computer for the Archive of the Archdiocese. The Archive currently owns a scanner, which will also be used in the project. As we have in past EAP projects, we will organise a workshop to train local university students and archive personnel on digitisation, image storage, and metadata creation in conformity with the guidelines set forth by the British Library. Our eighteen month project will proceed in four phases of three months each. Given the archive’s service to its modern constituents and labour laws in Brazil, it is not possible to close the archive to the public for the duration of the project so we propose to work in three-month cycles, with a break of one month between.

At the conclusion of the digitisation our Vanderbilt team will return to Niterói and host a conference to publicise the historical significance of the project as well as the collegial efforts that enabled it. We will also invite students involved with the project to present their resulting research.

View archives from this project (345)

This project will focus on two archives in the State of Pará, which hold collections on African slaves and their descendants in the Amazon region of Brazil - the Aquivo Público do Pará and the Museu Integrado de Óbidos.

The project´s goal is to digitise a collection of manuscript documents deposited at the Arquivo Público do Estado da Bahia (Bahia State Archives-BSA): the 841 volumes of the Notary Records Books produced between 1664 and 1889, this last date being the year the Republic was proclaimed, and one yea

This project aims to identify and create a provisional inventory of parish documents in the area of Belém do Pará, specifically the parishes of Mojú, Bragança and S. Caetano.