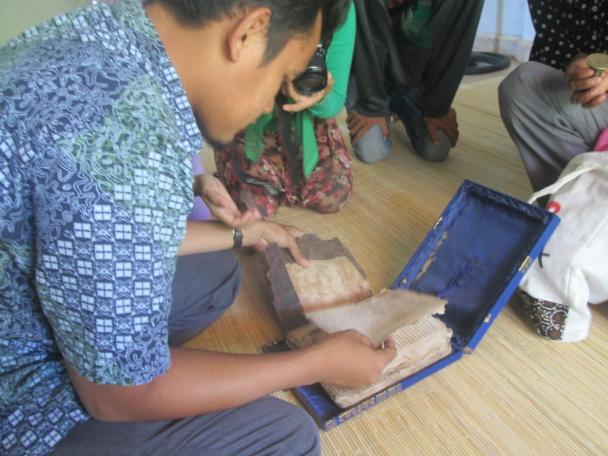 Information about manuscripts in Kampar is still rare. Mostly, they are kept by individuals or families that have not the professional skills in preserving or handling manuscripts properly. Meanwhile they are stored in an abandoned palace in Gunung Sahilan Kingdom established in the 18th century. This situation increases the possibility of the manuscripts being damaged. Some of them have potential to handover to manuscripts hunter, even one of the owner said that he will sell the manuscript with the right price to the one who want to buy it. It is strongly recommended to preserve manuscript in Kampar immediately by this project.

Based on the information from Kampar people, there are many other manuscripts that are owned by individuals and collectors and it is expected there are more than 150 extant manuscripts. All manuscripts are written in Jawi and Arabic.

The manuscripts in Kampar are a very important resource as the reference in the various fields, such as cultural, history, religion, law and good governance. Mostly they have not been published. This causes a lack of information for the public about our memory from the past. Today, Kampar is only known as one district in Riau province. Whereas, in the past, Kampar was part of trading traffic between India, Arabia, as well as many other countries. It is shown by the existence of Muara Takus Temple. Through this project, we expect history of gold ancient Kampar will be revealed.

This project focused on collecting data and digitizing of manuscript in Kampar, Riau Province, Indonesia. The outcomes will be delivered to archival partner where provide access for public who interested in Malay manuscripts. We hope that this project will lead to developed as the major project in the future.

11 collections from different locations (Air Tiris, Bangkinang, and Kuntu) were collected and digitised. They total 8843 photographs within 64 files. The collections consist of 59 handwritten manuscripts, 4 printed materials and 1 stamp.

In addition, the team also identified the manuscripts from Kampar, but that had been collected by private or institutions from elsewhere: Rokan Hulu, Pekanbaru, and Padang. These collections have been digitised and are also part of this project.

The following survey was submitted as part of the outputs from this project.

View archives from this project (74)

Cirebon was one of the important Islamic Sultanates in Java, together with Demak and Banten, and had been a centre for Islamic learning and the dissemination of Islamic teachings in West Java.

This pilot project will identify, copy and conserve manuscripts kept in private collections in the Pidie and Aceh Besar regencies. Acehnese individuals have collected more than 400 manuscripts dating from the 16th to 20th centuries.

This project focuses on endangered collections of rare Old Javanese and Old Sundanese palm-leaf manuscripts, dating back to the pre-Islamic period of the 16th century and earlier.

There are small collections of documents in the Riau Archipelago, which may throw new light on our appreciation of the wider Malay-Muslim world.