Collecting and preserving the records of the Evangelical Lutheran Church of Tanzania in Moshi, Tanzania (EAP099) 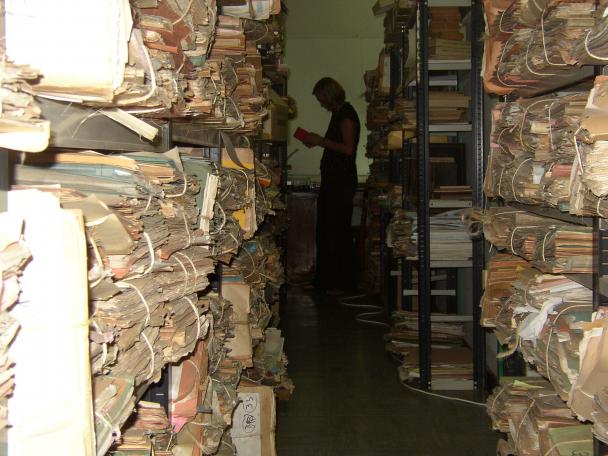 The archive at Moshi
View archives from this project (271)

Following the creation of the German protectorate in 1885, German missionary societies established themselves in different parts of Tanzania. The Leipzig Mission founded its first station on the slopes of Mount Kilimanjaro in 1893. By 1939 half of the (predominantly peasant) Chagga population had been converted; today most people are Christians. Although German rule ended in 1919, German missionaries returned in 1926, including a leading figure in German anthropology and mission history - Bruno Gutmann (1876-1966). In 1963 the mission church became the Evangelical Lutheran Church of Tanzania in Northern Tanganyika [later: Tanzania], consisting of 5 dioceses: Northern, Pare, Arusha, Meru and Central.

The archive of this church in the small town of Moshi in the centre of the Northern Diocese houses records which extend back to 1895. Some are in English, others in German or Swahili. Most researchers studying the history or anthropology of northeastern Tanzania visit this archive, although the conditions for research are far from ideal. There are plans for the archive to be extended. The material in Moshi suffers from poor shelving, changing temperature and humidity, a complete lack of boxes, in a few cases termites and silverfish, and above all dust. Some papers are in the process of becoming very brittle because of the influence of light. Those held at other former mission stations are in a similar state. Nevertheless, most of the material is still suitable for copying.

The material, produced by missionaries and subsequently by African converts, falls into seven categories, of which the first is the most important in terms of quantity:

Six parishes in the Northern Diocese (Kidia, Machame, Mamba, Masama, Mwika, Sika) have already agreed to transfer all their archival material to Moshi. There is additional material of historical interest, even more endangered, lying around elsewhere in the same region. These places, which have no archives of their own, belong to different dioceses (e.g. Ilboru in Arusha Diocese, Nkoaranga in Meru Diocese, Shigatini in Pare Diocese), but the need for cooperation and centralisation is recognised by the respective bishops. In the long term it may be possible to persuade some descendants of the first native pastors to donate whatever papers and / or photographs they have.

Any material not yet inventoried must be sorted and listed before it can be digitally copied. A finding aid will be produced for such material, serving among other things as a link between the digital copies and the originals.

To transfer the Leipzig Mission records to the Tanzania National Archives is not considered desirable in Moshi, where the records continue to have a meaning for the Church and descendants of the early Christians. Hence it seems more appropriate to work towards better conservation in Moshi itself, while depositing a copy of all digitalised records in 1) the Moshi archive, 2) the National Archives (Dar es Salaam) [master copy], 3) the British Library, 4) the University of Leipzig and possibly 5) Yale University.

This project was successful in digitising 20,744 pages of correspondence, mission station diaries, church registers (baptisms, marriages, funerals), parish council minutes, files on education and cash books, as well as some photographs. Most of the material is in German with a small amount in English or kiSwahili. Most of the records are not later than 1930 but where files started before 1930 and continued into the 1940s and 1950s, then the whole file has been digitised.

Nearly all of the material covered in this project is now housed in the archive of the ELCT Northern Diocese, PO Box 195, Moshi. This includes records transferred from the neighbouring parishes of Kidia, Machame, Mamba, Masama, Mwika and Siha, as well as a large amount of material that was already in Moshi.

Digital copies, on 98 DVDs, have been deposited in:

View archives from this project (271)

Preserving a unique archive of diaspora and disease in the Indian Ocean from 1868 to 1930: a test case from Mauritius

This archive is a near-complete set of burial records, dating back to January 1868, of individuals who have been interred in the Bois Marchand Cemetery in Mauritius.

This pilot project is designed primarily to identify significant endangered co-operative materials in Tanzania and investigate the potential for relocating them to a safer environment in order to prevent their loss and deterioration and to preserve the heritage.

The East African (EA) Herbarium library houses rare and unique historical botanical collections in the form of slides, microfilm, photographs, card index and illustrations that were collected in pre-colonial and during colonial times.